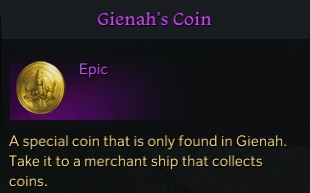 Keep daily tabs on the traveling merchant visiting your Stronghold. You are looking for Merchant Tago who offers Gienah’s Coins in turn for Raid Seals.

When you come across Merchant Tago you will be able to trade 300x Raid Seals for 100x Gienah’s Coins. If you are having trouble acquiring Raid Seals you can focus on Sailing Missions within your Stronghold that offer some as rewards from completing sailing expeditions.

Many islands do provide High Seas Coin Chests by simply completing the island’s questline. Usually, these quest chains are fairly quick to complete and provide a selection chest for 100x coins of your choice – one being Gienah’s Coin. Acquiring Gienah’s Coins through these selection chests is probably the most reliable way to farm them.

You can view these alert settings by the timer notifications at the top left corner of your screen or by going into the Procyon’s Compass and viewing alerts. Hover your mouse over the available island events to see the completion rewards – focusing on the islands that offer High Seas Coin Chests.

You can also acquire Gienah’s Coins by completing the daily activities across the open seas. Just like Adventure Islands, simply use Procyon’s Compass on the bottom of the minimap and browse the available active quests coming up on the timers.

The Sailing Co-op events you will want to focus on are Arthetine, Anikka, Vern, and Gate of Harmony as these are the only activities that offer Gienah’s Coins as rewards. Also, the amount of Gienah’s Coins you are given is based on your participation and can score you anywhere between 60 to 100 Gienah’s Coins.

Now if you find that you have too many Gienah’s Coins do not worry, there are plenty of things to spend them on! Trade Vessels outside of city ports are very easy to check real quick and provide many sources of spending your Gienah’s Coins. You can trade Gienah’s Coins for Pirate Coins, Ship Upgrade Blueprints, or Ship Crew Applications.