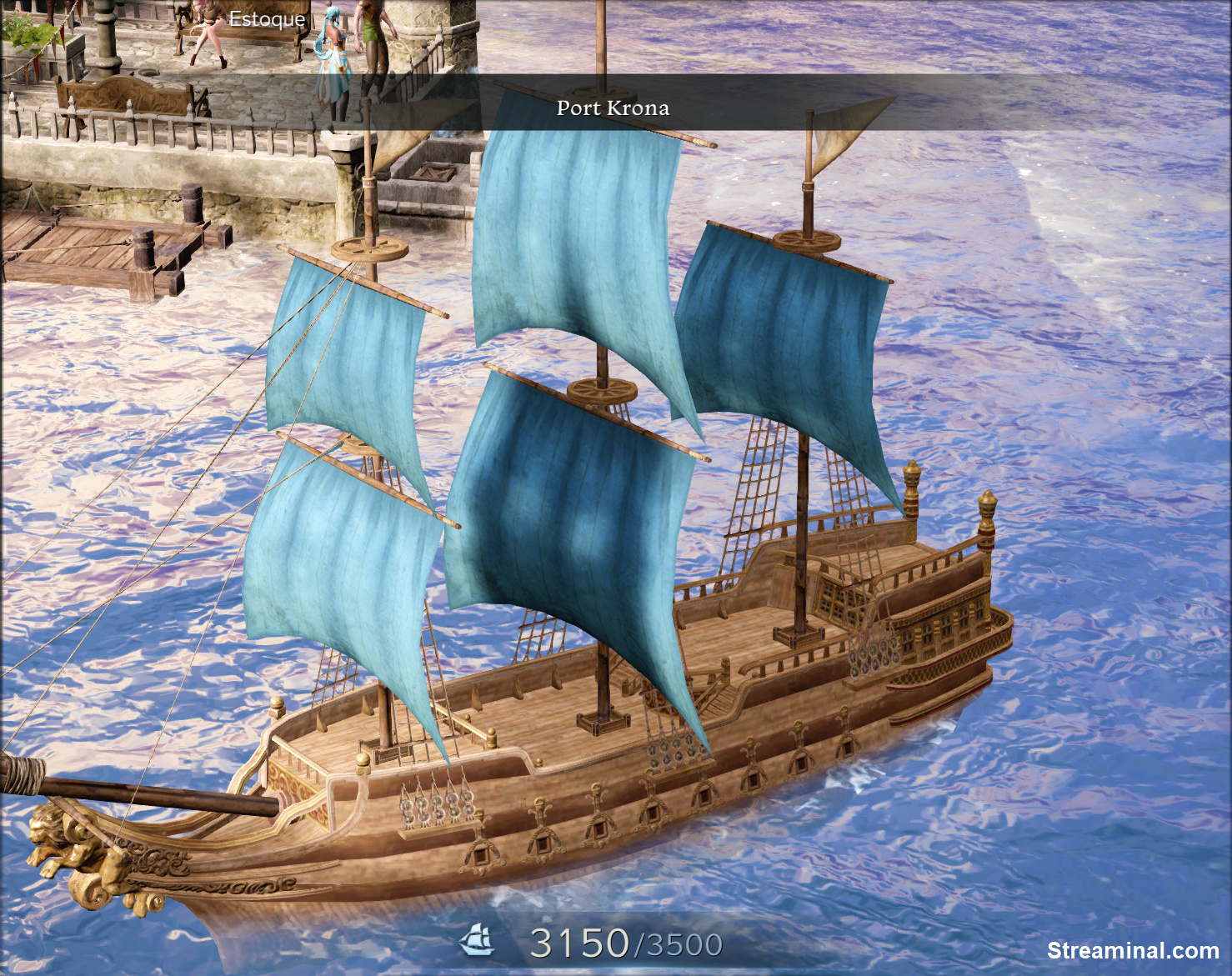 Upgrading your Estoque ship, but not quite sure which crew members you should use. This guide will provide the optimal setup and how to get each crew member.

The Estoque Ship is a great all-around ship for tackling all the general content through T1-T3. Out of all the ships, the Estoque is probably the most cost-efficient and well-rounded build available out of all the options. Sure, it can be argued other ships are superior in certain areas (Speed or specific resistance), but in terms of general use for tackling the wide range of content, the Estoque is kind of the jack-of-all-trades – master of none. With the right crew set up on the Estoque, you can confidently roam the Open Seas without any worry.

Resistance levels matter for sailing around the map and having to cross through hazardous waters. It really matters for Co-op Sailing Events where you tend to idle in hazardous waters for a long period of time for the event objective. When selecting Crew Members for your Estoque, it is important to understand the hazardous water breakpoints so that you can aim the Estoque’s resistances to certain values – maximizing protection as you sail through various hazardous waters. Hazardous Waters have four levels (shown when viewed on the map – Level 1-4) and their resistance breakpoints are 10, 20, 35, and 60; respectively. So, for example, if you are entering a Dead Waters Level 3 you would ideally want your Estoque to have 35 Dead Water resistance. Below is a breakdown summary table of hazard waters levels resistance penalties and your ships resistance conditions.

No matter what ship you are using, you should try and focus on Dead Waters and Tempest Waters resistances as these two are the most punishing to sail through. If you can obtain +60 resistance in each, you are a floating armored tank on the seas and can probably sail almost anywhere carefree.

It should also be noted that some people do not care for resistance and just want top speed for traveling around the map faster. In that case, most of this guide will not apply the same logic for crew members as you can select different sailors offering more speed increases for fewer resistance gains / more resistance penalties. Also, if going for speed you would really want to focus on the Astray ship.

Below is a summary view of the crew members available for the Estoque Ship. The table is sorted by Sailor and their rarity level (Common, Uncommon, Rare, Epic, Legendary, Relic). The values associated with each column are the resistance values that they would add to your Estoque ship if an active crew member. Lastly, the final column on the right is the added speed the sailor would contribute to the ship if an active crew member.

As you can see, depending on which task or event you are trying to pursue you may want to swap in and out sailors to build up ship resistances to target specific hazardous waters. It should be noted that Uncommon or Rare Tasha is almost always a good option for one of your crew member slots as she gives a flat value across the board for all resistances, but does lack any speed increase benefit.

Selecting the optimal crew set up to do-it-all can be tough as you try and keep all resistances across the board high. For this reason, we are focusing our efforts on achieving the highest possible resistance in the most dangerous hazardous waters – Tempest Waters and Dead Waters. This makes it a little more straightforward for us as referencing the Crew Summary Table above you can easily see Cals and Pupuring are the sailors we want to grab.

Above is the optimal crew member roaster for the Estoque ship that will allow you to tackle most content efficiently without worry. It can be noted that you can really acquire any Tasha rarity as still be in a very good place – you do not necessarily need to focus on getting Rare (blue) Tasha right away.

Alternatively, if you would like Kelp resistance for whatever reason you can adjust the crew roaster to below – also giving you a slight Speed increase. Again, you can really focus on any rarity for Tasha and be still be good.

If you have purchased or acquired a Ship Skin you are also granted +12 resistance points to allocate where you choose – a max of +7 on one hazard category. For example, you could add +7 to Tempest Waters and then +5 to Dead Waters. This is important because as mentioned above in Resistance Levels we covered the resistance breakpoints you need to focus on to be effective – 10, 20, 35, 60. Therefore, with the +12 resistance points granted by ship skins, you can boost certain categories to get you to that next breakpoint you might be close to.

In some situations, you may also want to push for +65 resistance points in certain categories. Take our optimal crew roaster above, we have 64 resistance to Dead Waters. If we use one ship skin resistance point to bring it up to 65 resistance that would give us a better resistance when entering Level 3 Hazards (-35 resistance) – your ship will be granted “normal” resistance up from “weak” resistance if you left your Dead Waters resistance at 64. It really comes down to a play on numbers and what task you are trying to accomplish – readjusting your resistances accordingly.