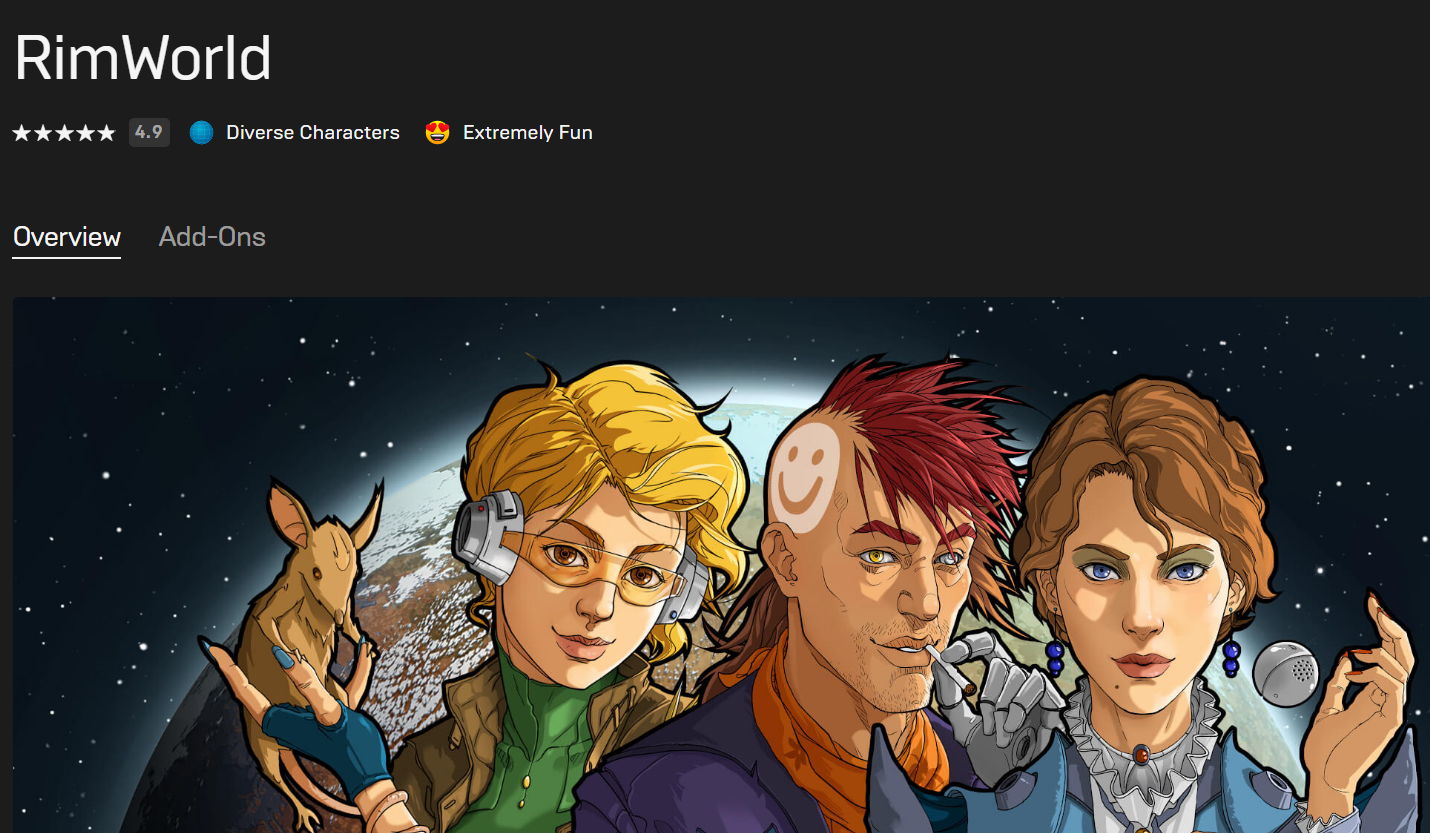 When you purchase through links on our site, we may earn an affiliate commission at no additional cost to you.

There are a few options for PC gamers when it comes to Rimworld. There are two main digital platforms for buying video games: Steam and Epic Games. Both offer a variety of games for purchase, but which one should you use to buy Rimworld? You can purchase it on Steam, the most popular platform for buying games, or on Epic Games, the new kid on the block that is quickly gaining market share. So, which should you buy Rimworld on?

The cheapest way of getting Rimworld is on Epic Games using a promotion coupon (often $10 off any game over $15) for any game during a sales event. This is a great opportunity for those on a budget to obtain Rimworld, which can easily give you hundreds of hours of entertainment with the base game alone. Adding either DLC expansion, Rimworld: Royalty or Rimworld: Ideology, will further expand the game for countless of hours to be added making replayability indefinite.

Whether purchasing on Epic Games or Steam, Rimworld base games and expansions are the same. The content available is identical between both game versions. However, again, the only difference is the ease of modding capability. If modding is not an interest to you then Epic Games makes clear sense to purchase Rimworld allowing you to save $10 of the listing price.

I am usually a basic gamer who stays away from modding, but my enjoyment of Rimworld and the urge to change the gameplay up with more complexity and depth has made me plunge into the modding community head first. I started out with some basic quality of life mods to make colony management a little easier but soon began installing gameplay-changing mods to spice things up. And I got to say, I am now completely for modding Rimworld and understand why so many do!

Some Rimworld mod developers do choose to have their mods available on GitHub too which provides an option for players who don’t own the game on Steam, even if it may be more effort for them to download and compile the mod. But it depends on the mod developer as not all want to do the extra work and upload their mod to multiple directory libraries – most tend to just still with the Steam Workshop. This means downloading off GitHub can create additional headaches as you may be downloading out-of-date mods that the developer forgot to update and there will now be compatibility issues with the current game patch.

One mod developer from the Steam forums stated, “As a mod author the steam workshop just makes the process way easier. It’s cleaner and there are just more recourses for a modded.”

So, the question must be weighed on by you. Is saving $10 to buy on Epic Games worth the added hassle of manually installing mods?

Rimworld on Steam very rarely goes on sale. The base game of Rimworld is always full price on Steam – even during major sales – while the DLC expansions tend to receive a small 10% off during sale events. In my opinion, this is okay. The game is incredible and I have put more hours into Rimworld than the majority of AAA games I play that are double the price. Rimworld quickly rose to my #1 game for hours played in my Steam library of 200+ games.

Whether you mod or not, Rimworld should be purchased on Steam to benefit from the Workshop mods. Sure, one can say you can get hundreds of hours out of the game without mods (I had around 300 hours before feeling like I am ready to try adding some mods), but after a certain point, Rimworld’s replayability depends on which mods are being used. Steam makes this the best choice, else you will be spending a lot of time manually managing your mods after every game update.

As stated above, I usually stay away from modding any game I play. Actually, Rimworld is the first and only game I have modded in my Steam library. I put in around 300 hours of gameplay before adding the first mod to Rimworld. In saying this, I totally recommend buying Rimworld on Steam even if you do not anticipate ever modding.

I thought I would never mod. But after looking at the Steam Workshop, adding a mod to Rimworld on Steam is simply one button click. There are no manual instructions to read and follow or files to copy and paste. You click one button in the Steam Client and the mod is installed in the Rimworld directory. Best of all, the mods are automatically updated as the game patches. So it’s basically set it and forget, Steam handles everything for you and ensures the mod remains updated to the latest patch released.

For those who still feel as though they will never mod because they do not want to change the original gameplay, you may want to check out some highly recommended quality of life (QoL) mods before jumping to the conclusion of just going with Epic Games for the $10 off.

The Verdict: Rimworld on Steam or Epic Games?

I strongly recommend buying Rimworld on Steam over Epic Games. For myself, saving $10 versus giving up an easier way to install mods is not worth it in the long run of enjoying the game. If you prefer to sacrifice convenience in order to save some money then that’s perfectly acceptable too! The decision is totally dependent on the individual.

Ultimately, there’s no real wrong decision. The choice is totally up to you and only you. If you’re fairly technical and good at computers then you may be thinking it’s easy enough for you to just do the mod installs yourself manually. Others may feel turned away by that thought.

Myself, I work a full-time job and have a family life with young kids. My hours of playing video games are limited and I certainly do not want to be spending valuable time troubleshooting why my game is crashing or a mod isn’t working because I’m manually tracking and installing everything. I want to simply log in to Steam and boot up Rimworld knowing everything is running smoothly so I can enjoy a couple of hours of gaming at the end of my day. I love Rimworld!